Railway tunnels are relatively safe places. The risks for passengers and train crews are lower in tunnels than on the rest of the railway network because many of the causes of accidents, such as collisions at level crossings, collisions with obstacles on the track (cars, trees, etc.) or with shunting trains, and derailments owing to natural phenomena (e.g. flooding, avalanches) are non-existent in tunnels.

For the above-mentioned reasons and because operation is simpler, accidents in tunnels occur less frequently per train-kilometre than outside tracks.

However, evacuation and rescue are more difficult in tunnels. And the most relevant difference by comparison with tracks in the outside is the confined space of a tunnel, in which a fire that could be a manageable incident elsewhere can prove to be catastrophic 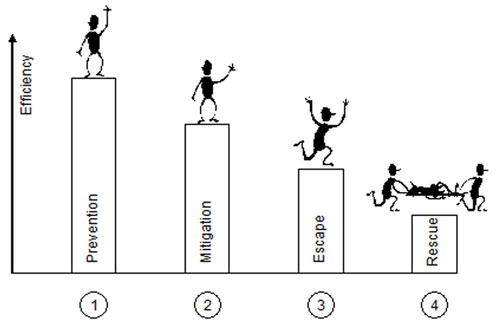 Prevention is better than cure: the strength of the railways is the safety of the rail technical system. Trains are guided by rails. Train intervals are controlled by the signalling system in order to prevent collisions. Modern rolling stock is less likely to catch fire