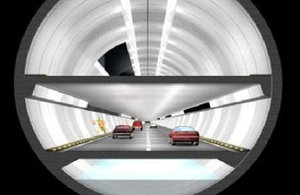 Malaysia Kuala Lumpur’s Stormwater Management and Road Tunnel (SMART) is a unique solution to the Malaysian capital’s long-term traffic and stormwater management problems and the first tunnel of its kind in the world.

The dual-purpose tunnel diverts floodwaters away from the confluence of the two major rivers running through the city centre while its central section doubles up as a two-deck motorway to relieve traffic congestion at the main southern gateway into the city centre.

The project was implemented through a joint venture pact between MMC Berhad and Gamuda Berhad with the Department of Irrigation And Drainage Malaysia and the Malaysian Highway Authority as the executing government agencies.

The SMART system will be able to divert large volumes of flood water from entering this critical stretch via a holding pond, bypass tunnel and storage reservoir. This will reduce the flood water level at the Jalan Tun Perak Bridge, preventing spillover.

The Stormwater Management and Road Tunnel (SMART) project was incepted by the project proponent, namely MMC Berhad-Gamuda Berhad Joint Venture, primarily to mitigate the recurring floods in the city of Kuala Lumpur, the financial, business and commercial hub of Malaysia.

However, at the design stage of SMART, the dual purpose concept was born from the ingenuity of the project proponents and the motorway tunnel was integrated into the system to relieve traffic congestion at the main Southern Gateway to the city centre.

This reduces traffic congestion at the Southern Gateway leading to the city centre. The travel time is reduced significantly. For example from the Jalan Istana Interchange-Kampung Pandan the travel time is a mere four minutes compared to ten to fifteen minutes using the conventional roads.

The total project cost of the SMART Tunnel is about RM 1.9 billion.

Mode one operates under normal conditions or when rainfall is low such that no water needs to be diverted into the tunnel.

Moderate storms activate mode two. This diverts floodwater into a bypass tunnel in the lower section of the motorway tunnel which remains open to traffic.

During the once or twice yearly heavy storms a switch is made to mode three when the tunnel is closed to road traffic and the full tunnel section with a combined capacity of 3 million cubic metres becomes available to divert the dramatically increased flows.

Extensive monitoring stations will ensure sufficient time is allocated to allow the last vehicle to exit before the automated watertight gates are opened.

The motorway will then reopen to traffic after clearing of the tunnel within 48 hours of closure.

Two Mixshields - "Tuah" and "Gemilang" have been tunnelling since the summer of 2004 from just one launch shaft through varying geological conditions such as limestone, marble and sand. "Gemilang" reached its target after 3.968 kilometers in April 2006, "Tuah" had to continue tunnelling till April 2007 to complete its stretch of 5.372 kilometers.

Both 3km long road decks were opened for traffic on 15 May 2007. The official opening of the overall 9.7 kilometer long stormwater-tunnel occured one month later.