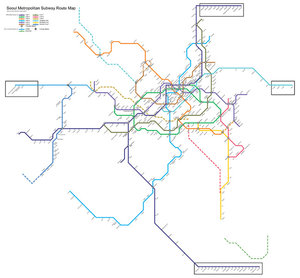 The Seoul Metropolitan Subway is one of the most heavily used rapid transit systems in the world, with well over 8 million trips daily on the system's ten lines totaling 287 km. The system serves Seoul, Incheon, Gyeonggi province and northern Chungnam province.

In the 1990's, Seoul has carried out probably the world's most ambitious subway extension program adding 160 km of new lines to the network.

This included the extension of former lines 2, 3 and 4 (15 km) and 4 totally new lines of which line 5 is 52 km long (including both eastern branches). New maps also include Incheon's first subway line which is linked to the Seoul subway network via Line 1.

Two new subway lines are currently under construction and have yet to open:

There are several major works still in the planning stage: