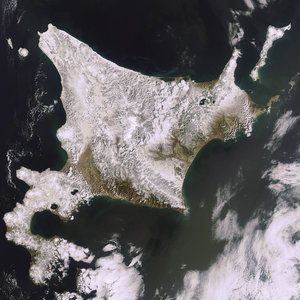 In response to public outrage, the Japanese government searched for a safer way to cross the dangerous strait. With such unpredictable weather conditions, engineers agreed that a bridge would be too risky to build. A tunnel seemed a perfect solution. Ten years later, work began on what would be the longest and hardest underwater dig ever attempted.

Engineers couldn't use a tunnel boring machine to carve the Seikan Tunnel because the rock and soil beneath the Tsugaru Strait was random and unpredictable.

Instead, tunnel workers painstakingly drilled and blasted 33 miles through a major earthquake zone to link the main Japanese island of Honshu with the northern island of Hokkaido.

Today, the Seikan Tunnel is the longest railroad tunnel in the world at 33.4 miles in length (till the Gotthard base tunnel in Switzerland will be opened), 14.3 miles of which lie under the Tsugaru Strait.

Three stories high and 800 feet below the sea, the main tunnel was designed to serve the Shinkansen, Japan's high-speed bullet train.

Unfortunately, the cost of extending the Shinkansen service through the new tunnel proved to be too expensive.

In fact, air travel today between Honshu and Hokkaido is quicker and almost as cheap as rail travel through the tunnel.

Despite its limited use, the Seikan Tunnel remains one of the greatest engineering feats of the 20th century.