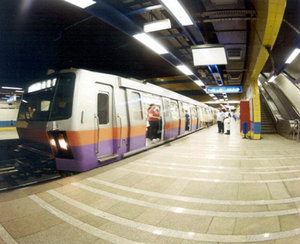 Greater Cairo underground metro is considered one of the most important national projects executed in the Republic during the second half of the twentieth century.

This project is included in the plan of urban transportation in the Greater Cairo Region. The project consists of three lines linking the capital districts with the center of the city, aiming to develop a modern and efficient underground transportation system.

The project also considers the construction of secured parking areas and multi-story garages for private parking at the main squares to encourage the use of public transport.

Three main lines compose the Greater Cairo underground metro. Lines 1 and 2 have been already been built, line 3 is undergoing at the moment of this writing.

Line 1 forms the backbone of the Metro network in Cairo as it passes through the most important residential and business districts of the city.

The Line 1 was designed to carry 60,000 passengers per hour in each direction, in electrically powered trains comprising 9 cars each, with a headway of 2.5 minutes and a maximum speed of 100 Km/hr and a track gauge of 1.435 m.

Diaphragm Walls were used to support the sides of the excavation during the phases of construction and became part of the structure by being joined to the raft and roof , thus forming the cross-section of the tunnel and stations.

A grouted plug of cement/bentonite was used between the diaphragm walls at their toes. The function of the plug was to reduce the permeability of the soil to permit dewatering of the excavation with limited discharge and without affecting the level of the groundwater outside the walls to ensure the stability of the adjacent buildings.

The precast panels in the tunnel sections were 0.45 x 2.5 m with 12 m length. The cast in-situ walls thickness varied between 0.6 to 1.0 m depending on depth.

Unlike Line 1, the Line 2 was conceived as a totally new line.

The Line extends from Shubra-El-Kheima station to Om-Elmasreen Station with a total length of 19 m and 18 stations.

The Line includes 6 Km of at-grade and viaduct section with 6 at-grade stations, cut and cover tunnels of length 1.8 Km, bored tunnel of length 9.5 Km and 10 new underground stations besides the development of the two interchanging stations at Mubarak and Sadat Stations. Line 2 was completely finished on October 2000.

The tunnel has a bolted precast concrete segmental lining, each 1.5 m wide and 0.40 m thick. It should be noted that it was the first time that the River Nile was crossed by a bored tunnel underneath the bed of its two branches.

The underground stations are typically 150 m long, 21 m wide and 23 m depth, each having three levels. They have been built using top bottom construction between diaphragm walls 1.2 m thick and extending down to 55 m below ground level.

The water table was about 2 m below the ground level. Soil injection was used to form a low permeability plug, 7 m in thickness, at the base of the walls.

The trains have a design maximum speed of 80 Km/hr with a minimum headway of 105 seconds, transporting about 1.2 million passengers per day.

Line 3 will extend from the north west of Greater Cairo at Imbaba to the north east at Heliopolis serving also the Cairo International Airport.

The Line shall cross under the two branches of the River Nile.

The total length of the Line is approximately 30 km most of which is bored tunnel.

The stations will be constructed by the cut and cover method. The basic design is currently in progress.