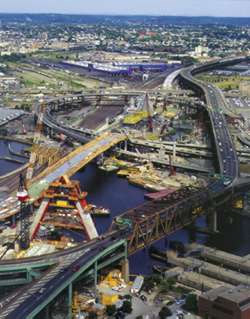 Recognized as the largest, most complex, and technologically challenging highway project in the history of the United States, the Central Artery/Tunnel Project significantly reduced traffic congestion and improved mobility in one of America's oldest and most congested major cities.

In addition, it helped improve the environment, and established the groundwork for continued economic growth for Massachusetts and all of New England.

The Project replaced Boston's deteriorating six-lane elevated Central Artery (I-93) with an eight-to-ten lane state-of-the-art underground highway, two new bridges over the Charles River, extended I-90 to Boston's Logan International Airport, and Route 1A, created more than 300 acres of open land and reconnected downtown Boston to the waterfront.

When planning for the CA/T Project began with the preparation of environmental impact documents in 1982, transportation experts could not accurately predict the challenges that lay ahead on the long journey to design and construction. Congress approved federal funding and the Project's basic scope in April 1987.

Construction began in September 1991 on a Bypass Road through South Boston to take truck traffic off neighborhood streets and on the third tunnel to cross Boston Harbor.

The first major milestone, the opening of the tunnel - dedicated and named after baseball legend Ted Williams. Substantial completion was reached January 13, 2006

Boston, Massachusetts had a world-class traffic problem, an elevated six-lane highway called the Central Artery that ran through the center of downtown. When it opened in 1959, the Central Artery comfortably carried about 75,000 vehicles a day. In the early 1990s it carried upwards of 200,000 making it one of the most congested highways in the United States.

Traffic crawled for more than 10 hours each day. The accident rate on the deteriorating elevated highway was four times the national average for urban Interstates. The same problem plagued the two tunnels under Boston Harbor between downtown Boston and East Boston/Logan Airport. Without major improvements to the Central Artery and the harbor crossings, Boston expected a stop-and-go traffic jam for up to 16 hours a day - every waking hour - by 2010.

The annual cost to motorists from this congestion - in terms of an elevated accident rate, wasted fuel from idling in stalled traffic, and late delivery charges was estimated at $500 million.

And traffic wasn't the only problem the old Central Artery caused in Boston. The elevated highway (which displaced 20,000 residents when it was built) also cut off Boston's North End and Waterfront neighborhoods from the downtown, limiting these areas' ability to participate in the city's economic life.

This extraordinary traffic mess represented a continuous economic and quality-of-life drain on Boston and New England. The solution, called the Central Artery/Tunnel Project (CA/T), was constructed under the supervision of and operation of the Massachusetts Turnpike Authority.

Replacing the six-lane elevated highway with an eight-to-ten-lane underground expressway directly beneath the existing road, culminating at its northern limit in a 14-lane, two-bridge crossing of the Charles River. After the underground highway opened to traffic, the crumbling elevated was demolished and in its place is open space and eventually modest development.

The extension of I-90 (the Massachusetts Turnpike) from its former terminus south of downtown Boston through a tunnel beneath South Boston and Boston Harbor to Logan Airport. The first link in this new connection - the four-lane Ted Williams Tunnel under the harbor - was finished in December 1995.

To put these highway improvements in the ground in a city like Boston proved to be one of the largest, most technically difficult and environmentally challenging infrastructure projects ever undertaken in the United States. The project spanned 7.8 miles of highway, 161 lanes miles in all, about half in tunnels.

All told, the CA/T placed 3.8 million cubic yards of concrete - the equivalent of 2,350 acres, one foot thick - and excavated more than 16 million cubic yards of soil. The larger of the two Charles River bridges, a ten-lane cable-stayed hybrid bridge, is the widest ever built and the first to use an asymmetrical design. It has been named the Leonard P. Zakim Bunker Hill Bridge.

At the northern limit of the project, a new interchange connects I-93 north of the Charles River to the Tobin Bridge, Storrow Drive, and the new underground highway.

At the southern end of the underground highway, the interchange between I-90 and I-93 was completely rebuilt on six levels -- two subterranean -- to connect with the underground Central Artery and the Turnpike extension through South Boston. The interchange carries a total of 28 routes, including High Occupancy Vehicle lanes, and channels traffic to and from Logan Airport to the east. A fifth interchange, at Massachusetts Avenue on I-93, has been rebuilt by the project.

The Central Artery/Tunnel Project was public works on a scale comparable to some of the great projects of the last century -- the Panama Canal, the English Channel Tunnel (the "Chunnel"), the Trans-Alaska Pipeline.

The Chunnel was dug from either end, 31 miles apart, meeting at a precise point under the channel floor. The Alaska Pipeline contended with vast distances, freezing temperatures, and major environmental concerns.

The Central Artery project's unique challenge was to construct this project in the middle of Boston without crippling the city. Work of the CA/T project's magnitude and duration had never been attempted in the heart of an urban area, but unlike any other major highway project, the CA/T was designed to maintain traffic capacity and access to residents and businesses - to keep the city open for business - throughout construction.

Highway projects of the 1950s and 1960s, when the interstates were first built, gave very little consideration to the communities in the path of the new roads, with disruption and dislocation the rule of the day.

Recognizing that failing to maintain Boston's economic viability during construction would damage the city's competitive position for years to come, project planners worked with environmental and other oversight and permitting agencies, community groups, businesses, and political leaders to create consensus on how the project would be built.

The process of keeping the city open and making certain that all affected groups are treated fairly is called mitigation, and it has taken up more than a fourth of the project's budget.

Due to traffic improvements and substantial reductions in traffic delay, the total vehicle- hours of travel on Project highways has dropped 62 percent between 1995 and 2003 and are now providing approximately $168 million annually in time and cost savings to travelers.

Residents from south and west of Boston average travel times from the I-90/I-93 interchange to Logan Airport during peak periods have decreased between 42 and 74 percent depending on direction and time of day.

A 12 percent reduction in citywide carbon monoxide levels was achieved. Economic and transportation benefits are described in detail in this report.

Along with improving mobility in downtown Boston, the Project reconnected neighborhoods severed by the old elevated highway, and improved the quality of life in the city beyond the limited confines of the new expressway.

Clay and dirt from the Project was used to fill and cap landfills throughout New England including the former city dump at Spectacle Island.

The Central Artery/Tunnel Project created more than 45 parks and major public plazas. Major shoreline restoration has been completed in the Charles River Basin, Fort Point Channel, Rumney Marsh and Spectacle Island as well as in significant stretches of the Boston Harborwalk.

Visitors enjoy the park and pathways at the 100-acre Spectacle Island. The island and its new visitors center and docking facilities were turned over to the City of Boston and the Department of Conservation and Recreation in 2006.

A series of parks with water features and other amenities were constructed in the path of the old elevated Central Artery from Chinatown through the Wharf District and North End and is now known as the Rose Kennedy Greenway. In 2004 the non-profit Rose Fitzgerald Kennedy Greenway Conservancy was founded as the official steward of the Greenway.

Accessing the Greenway is a new tree-lined boulevard in Boston's downtown corridor, including several miles of new and refurbished sidewalks, 600 street lights, nearly 900 trees with irrigation and numerous plazas.

Other parks and new landscaping along the Charles River Basin and in East Boston have transformed the city. While three quarters of the 30 downtown acres will remain as open space, 25% is set aside for modest development including retail, commercial, and housing uses in low-rise buildings.

Projects in development are the New Center for Arts and Culture and a YMCA.