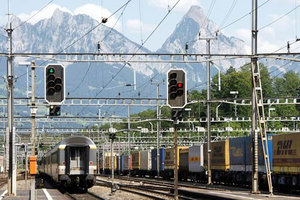 The Gotthard Base Tunnel (GBT) is a railway tunnel under construction in Switzerland.

With a planned length of 57 km (35.4 mi) and a total of 153.5 km (95.4 mi) of tunnels, shafts and passages planned, it will be the longest tunnel (of all railway and road tunnels) in the world upon completion, ahead of the current record holder, the Seikan Tunnel (connecting the Japanese islands of Honshū and Hokkaidō).

The project is designed to feature two separate tunnels containing one track each.

The tunnel is part of the Swiss AlpTransit project, also known as New Railway Link through the Alps NRLA which also includes the Lötschberg Base Tunnel between the cantons of Berne and Valais.

Like the Lötschberg tunnel, it is intended to bypass winding mountain routes and establish a direct route suitable for high speed rail and heavy freight trains.

On completion it is expected to decrease the current 3.5 hours travel time from Zürich to Milan by one hour. It will also reduce the time between Zürich and Lugano to 1 hour 40 minutes. The two portals will be near the villages of Erstfeld, Canton Uri and Bodio, Canton Ticino.

Completion had been projected for 2015 but due to delays the tunnel was thought (in early 2007) not be completed before 2018. With a breakthrough in one of the tunnels achieved on 15 June 2009, an opening date for the tunnels during 2017 seems likely since work currently is progressing at a higher pace than projected.

Nearby are two more St. Gotthard Tunnels: the 1881 Gotthard Rail Tunnel and the 1980 Gotthard Road Tunnel.

The route over Gotthard Pass or one of its tunnels is one of the most important passages through the Alps on the north-south axis in Europe.

Traffic has increased more than tenfold since 1980 and the existing road and rail tunnels are at their limits. In order to provide a faster and flatter passage through the Swiss Alps, the Swiss voters have decided to build this tunnel cutting through the Gotthard massif at nearly ground level, 600 m (1,969 ft) below the existing railway tunnel.

Passenger trains, on the other hand, will be able to travel as fast as 250 km/h (155.3 mph) through the new tunnels, reducing travel times for trans-alpine train trips by 50 minutes—and by one hour once the adjacent Zimmerberg and Ceneri Base Tunnels are completed.

A tunnel system with two single track tunnels is being built.

The two rail tunnels are joined approximately every 325 m (1,066 ft) by connecting galleries.

Trains can change tunnels in the two multifunction stations (MFS) at Sedrun and Faido. These stations will house ventilation equipment and technical infrastructure, and will serve as emergency stops and evacuation routes upon tunnelcompletion.

AlpTransit Gotthard AG is responsible for construction. It is a wholly owned subsidiary of the Swiss Federal Railways (SBB-CFF-FFS).

To cut construction time in half, four access tunnels were built so that the construction of the tunnel can start at four (now five) different sites simultaneously (Erstfeld, Amsteg, Sedrun, Faido and Bodio).

The contracts are being let in sections as follows:

Breakthrough in the longest railway tunnel in the world, the Gotthard in Switzerland, took place on 15 October in the east tunnel, 30 km from the north portal and 27 km from the south portal.