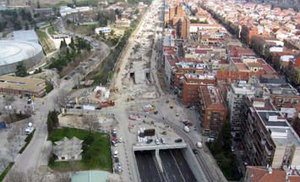 The Madrid M30 motorway, the inner ring road of the city, has been at the centre of a major urban renewal project where the motorway has been redirected underground. In 2004 it was determined that the M30 was a 'barrier' to movement in the urban areas it ran through.

Despite its necessity as part of the road infrastructure of Madrid it caused much pollution to the air and also the Manzanares River which it ran close to.

The Madrid Calle 30 project was undertaken to refurbish the road and reroute major sections of it through tunnels under the city areas with which it is associated.

This now allows the surface areas that used to be asphalt paved to be redeveloped into green park areas, footpaths, cycle paths and new affordable housing.

The new sections of road construction totalled 99km, 56km of which is in tunnels. Construction started in September 2004 and was complete by the second quarter of 2007. The total project budget was estimated at €3.9bn.

The motorway reconstruction took place in sections and was divided into 15 separate projects and four regions – north, south, east and west. A very large number of tunnels had to be built, by using different techniques.

The different tunnels made for the M30 project were:

TBMs used for the project

In order to build some of the tunnels, the largest TBMs in the world at the time of the project were specially ordered to both a joint venture between Mitsubishi Heavy Industries Ltd (MHI) and Duro Felguera SA, and Herrenknecht AG in Germany.

These two EPB tunnelling machines were used for construction of the south tunnel of the south bypass on the Madrid M30 and the north bypass. These were only one of the seven machines used to carry out the tunnelling excavation for the 15 projects of Madrid Calle 30.

All of the machines used an earth pressure balance shield system, since most of the excavation was in soft ground (little hard rock).

The inner diameter of the tunnels was 13.45m after lining.