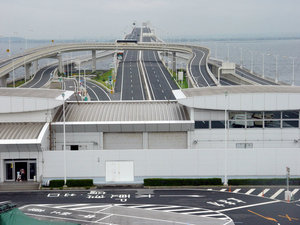 The Trans-Tokyo Bay Highway, also known as the Tokyo Bay Aqualine, is a 15.1 km marine crossing through the middle of Tokyo Bay connecting Kawasaki City in Kanagawa Prefecture with Kisarazu City in Chiba Prefecture on the Boso Peninsular.

With the journey from Kawasaki to Kisarazu now taking just 15 minutes, the highway plays a vital economic role in integrating these two areas of prime industrial importance.

The areas are otherwise separated by a 100-km journey through the heart of metropolitan Tokyo, so the Aqualine also eases traffic congestion in the broader metropolitan road network.

The total cost of construction as been 11.2 billion US$, at the time of opening in december 1997.

Construction of Tokyo Wan Aqualine was commenced in 1989, after 20 years of investigations and requiring 9 years of construction.

The Aqualine consists of a 9.5-km shield tunnel (the Tokyo Bay Tunnel) and a 4.4-km bridge from an artificial island to the Kisarazu landing.

The tunnel diameter is the world's largest for an underwater shield tunnel used for motor vehicle traffic. The cross-section diameter to the outside of the segment lining is 13.9 m, and the inner diameter of 11.9 m provides for two lanes of traffic in both directions.

The volume of shipping traffic in Tokyo Bay is extremely high. In view of the need to allow for sufficient shipping lanes and other factors, it was deemed necessary to construct the first approximately 10km segment of the Tokyo Wan Aqua-line extending from Kawasaki within an undersea tunnel.

The remaining approximately 5km to Kisarazu is spanned by a bridge.