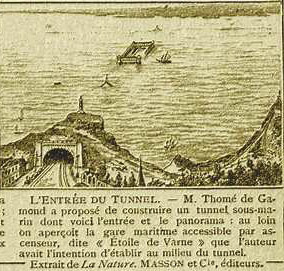 Already in the 40'000 b.C., Neandertal men excavated manually the ground in what is considered today the oldest mine ever done, in the Bomvu hill, Swaziland.

Later on, manual excavation was improved by the application of the fire technique, which consisted in creating a fire close to the rock and extinguishing it quickly to make the rock mass crack due to the strong thermal gradient.

However, it seems that the first tunnel excavated by men dates back to 2200 b.C., to communicate underground the palace with the temple of Belos, in Babilonia and done following a cut-and-cover kind of construction.

Later on, different civilizations continued to excavated tunnels and underground spaces. Sometimes these excavations where to play a religious role like in the case of Egyptians, but also they were built as hydraulic works to channel water from sources to the cities, like in the case of the quanats built between the Tigris and Eufrates rivers in the X b.C century.

In India and China, tunnels are built with a religious use very soon. Examples are the indian monasteries of Ellora and Ajanta , carved into the mountain, or the budist temples carved in the rock along the Silk route in China.

The first tunnel built whose engineer is known was excavated in the island of Samos. The engineer Eupalinos de Megara, built this tunnel in the 530 b.C to supply with water the capital of the island and was, with its 1 km length, considered as one of the three marvels of the helenic world.

Along with the general burst of civil engineering works that took place with the Romans, tunnels underwent a very intense development in those times. Tunnels for mines, water supply, sewage, draining,roads, military tunnels and catacombs were built intensively, reaching the record with a 5,5 km long tunnel for the emissary of Fucino.

After the Roman times, the middle ages would see a mild development in tunneling, apart from some strong advances in mining and the construction of underground fortresses for defensive reasons, like in Capadocia where underground villages home of up to 10’000 people where excavated in Derinkuyu.

In the Renaissance times, mankind wakes up and also the tunneling activity. Da Vinci conceives underground spaces in his urbanism projects and thinks about the possibility of tunneling through mountains to convey water across.
The first tunnel of Renaissance is the Daroca mine, with 600 meters of length, built in Daroca village (Spain) to deviate the torrential waters that threatened the village.

The XVIII century would witness a deep development in the construction of navigation channels across Europe.
The Malpas tunnel, close to Beziers in the Midi canal, is the first tunnel built for this majestic canal. The Malpas tunnel, with 156 m of length, was excavated by means of gun powder, for the first time in history. This would be the beginning of the use of explosives in tunneling engineering.
Many other canal tunnels followed, most of them in France and England, where James Brindley become of the most important figures in tunnel engineering of the XVIII century.

Samos Tunnel video (in French only)