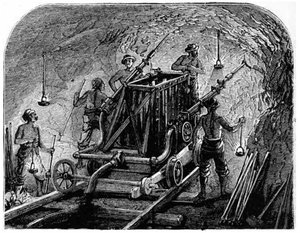 The experience acquired in tunneling engineering due to canal construction during the XVIII century paved the way for the big development in tunnel construction that came along with the industrial revolution and the boom in railway transportation.

The XIX century was a decisive time in the history of tunneling. Even if the railway transportation had already been used since the XVII century, the real breakthrough was the generalization of steel railway lines, and the invention in the 1825 of the steam engine that would become the new driving force for the locomotives.

These inventions supposed a major boost in railway engineering, leading to an explosion in the construction of railway lines between the major urban centers all over Europe, and the need of excavating tunnels when topographic accidents were to be crossed.

The first railway tunnel was the Terre-Noir tunnel in France, in the line Roanne-Andrezieux, with a total length of 1’477 meters.

In the United Kingdom, the railway connection between Liverpool to Manchester needed the construction of two tunnels, one of almost 5 km and the other of 1.6 km.

The second half of the XIX saw the construction of trans-alpine tunnels, remarkable engineering feats that allowed the main railway lines connect the north and south of this mighty mountain chain.

Tunnels like the Mount Cenis tunnel, Saint Gotthard and Simplon embodied the human determination and the victory of man over nature at the time.

With lengths of 12,6 km, 15,2 km and 19,7 km respectively, the construction of these tunnels with the modest tools of those times supposed a definitive leap in tunneling engineering.

The XIX century also saw the excavation of the first tunnel under a water way.

In 1843 the engineer Marc Brunnel finished the first tunnel under the Thames river. Excavated in soft ground in the presence of water, this tunnel supposed the first application of the shield technique.

Meanwhile, in the USA, the tunnels also witnessed a big development. In 1869 and 1871 two tunnels are opened under the river in the city of Chicago.

The nitroglycerine is used for the first time in the excavation of the Hoosac tunnel, and the tunnel of Saint Clair, built at the end of the XIX, is excavated by using the shield technique under the Saint Clair river, linking USA and Canada with a 6,45 m diameter opening.

The second half and end of XIX century would also witness another major leap in tunnel engineering.

The construction of the London underground in 1863 was the starting point for the rapid instauration of the underground railway as a new mode of mass transportation under the cities.

After the London underground, many others followed: Paris, Vienna, Stockholm, Washington, Glasgow, etc…