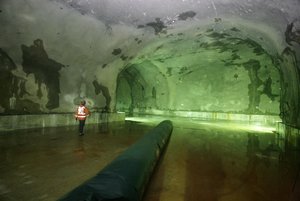 One of the big advantages of underground spaces is the high thermal inertia and the relatively limited cost of construction when the rock mass is of an adequate quality.

Another interesting factor is that while on most developed countries the cost of surface construction has risen increasingly at a steady rate, the cost of underground spaces has remained more or less stable.

This has bridged the gap between surface conventional spaces and underground spaces and has made interesting the construction of goods storage facilities where economies are found in the operation cost.

This operation economy is found, as already stated, in the fact that once the needed temperature inside an underground opening is reached, the rock mass will take years before the temperature level varies significantly.

A good example of this use is the the Svalbard Global Seed Vault, a secure seedbank located on the Norwegian island of Spitsbergen near the town of Longyearbyen in the remote Arctic Svalbard archipelago.

The facility was established to preserve a wide variety of plant seeds from locations worldwide in an underground cavern. The Seed Vault holds duplicate samples, or "spare" copies, of seeds held in genebanks worldwide, providing insurance against the loss of seeds in genebanks, as well as a refuge for seeds in the case of large scale regional or global crises.

As the seeds need to be kept at a stable temperature of −18 °C (0 °F), the storage underground within the permafrost helps to maintain low temperatures, also providing a big thermal inertia.

Even if the cooling equipment fails, at least several weeks will elapse before the temperature rises to the −3 °C (30 °F) of the surrounding sandstone bedrock.

Another use of the underground space is the storage of oil and gas.

The advantages are several: higher safety than in the case of surface structures, and reduced risk of leaking when the cavern is built in zones where the water pressure of the rock mass is higher than the gas or oil pressure inside the underground opening.

Some examples are the Jurong Cavern in Singapore, where the first rock cavern is being built to store oil under the man-made island of Jurong.

The mine naturally maintains temperatures between 65 and 70 degrees Fahrenheit (18 to 21 °C) year-round.