After 1980, a new leap in tunnel engineering is made due to the quickly generalization of high speed railway lines, which need strictly low steepness values and very long radius for curves, leading to long and deep tunnels.

In 1983, the new 54 km long railway tunnel Seikan is finished to link under the strait of Tsugaru the two main islands of Japan, Honshu and Hokkaido.

In Scandinavia, Norway becomes one of the leading countries in the world in underground construction and tunneling engineering in particular. 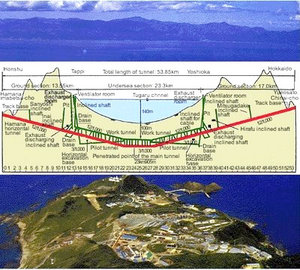 After the construction of this tunnel, many more were excavated, being the most famous nowadays the Laerdal tunnel, which was finished in 2000 year and became the world longest road tunnel in the world, with its 24,5 km of length.

However, the big inflexion point in the history of tunnel engineering in the XXI century takes place with the construction of the Channel tunnel, linking England with France.

The construction of this tunnel supposed the materialization of a project that had been dreamt for more than two centuries. After several projects and excavation attempts made during the XIX century, the construction of the Channel Tunnel was finished in the 1994, linking England with France via a tunnel of 51 km of length, from which 38 km lied under the sea.

This tunnel also supposed a major leap in the technology used to excavate tunnels, and can be considered as the tunnel which triggered a revolution in the use of TBM or tunnel boring machines for the mechanized excavation of tunnels.

Indeed, during the remaining part of the XX century and the first years of the XXI, the generalization of high speed railway lines across Europe and their particularly demanding geometrical conditions paved the way to a major revolution in the use of TBMs.

In the last years of the XX century and the beginning of the XXI we see the construction of major record-breaking base tunnels crossing mountain chains, like the base tunnels of Lotschberg , Gotthard and Ceneri in Switzerland, the Guadarrama and Pajares tunnel in Spain, the Brenner tunnel between Austria and Italy, the Lyon-Turin tunnel between France and Italy, etc.

All these tunnels, with lengths of up to 50 km and depths of several thousands of meters, have raised the technology of mechanized tunneling to unbelievable levels, where tunneling is being made in very difficult conditions of squeezing, spalling, rock bursting, water pressure and high stressed rock masses.

For the future, some engineering feats are still in store in the field of tunneling.

Preliminary studies are being conducted nowadays for the eventual construction of a submarine tunnel between Africa and Spain, through the Gibraltar strait.