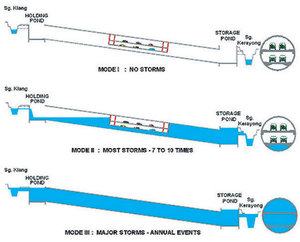 In some areas, flooding of cities can occur quite often and be a nightmare for the inhabitants.

One of the solution is to built underground structures that allow storage of water while the flow of rain has time to be transported in the sea or rivers.

One of the first large city to realize that building two different systems one for sanitary sewage and one for storm water has been Chicago.

The studies in the late 60's recommended the Tunnel and reservoir Plan (TARP). (Read more : http://encyclopedia.chicagohistory.org/pages/367.html)

Recently this has been developed in Kuala Lumpur – Malaysia in a very specific way as the idea occur that to make this storm water tunnel more economically affordable it could use for other purpose during the -maybe 360 days a year – not used as a storm water tunnel.

It is the reason why this tunnel is a road tunnel converted in a storm water storage tunnel when necessary.

Another typical example of underground facility essential in the management of water in urban environments are the stormwater storage tanks, which serve to regulate and control the flow of water due to rain in urban environments, by retaining the high volume of water coming from rain and releasing it slowly back into the network.

Due to the space limitation and for safety reasons, these facilities are often built underground. At the same time, de-pollution basins can be built to separate oils, greases and fine-coarse particles in suspension, helping to reduce the content of pollutants in the water for ulterior treatment in the sewage plants.