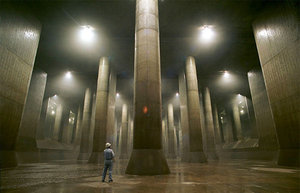 Sewerage management is also a priority for the general public and a major worry for public authorities.
There are three main reasons for this :

In order to collect and transport sewage waters from domestic, agricultural and industrial use to the treatment plants, underground galleries are needed.

The need of maintaining a minimum level of hygiene led in the past to a quick adoption of underground conveyance, as soon as the awareness for public health began to grow.

Nowadays, complex underground networks of sewage galleries are used in almost all big cities. In some occasions, sewage galleries have been put even deeper into the rock bed. One example is the city of Stockholm where the conveyance of wastewater to the treatment plants is made through rock tunnels.

These tunnels have been found to be advantageous as the main collectors not only to the underground plants, but also to plants situated in the open air.

The advantage is that it is possible to traverse densely built-up areas by underground tunnels without interfering with traffic and other urban facilities networks buried closer to the surface.

In some cities, only underground treatment plants can meet the new requirements in term of de-pollution, being installed as near as possible to the source of production and river discharge areas.

Their construction is possible thanks to new processes permitting to build compact, nuisance-free plants.

In Scandinavia, it is common to find underground wastewater treatment plants.

For instance, the city of Stockholm and its surrounding suburbs have several wastewater treatment plants situated in underground rock. The first of these plants, Henriksdal, was constructed between 1936 and 1941.

Originally designed for primary treatment only, it has been gradually extended to include secondary treatment.